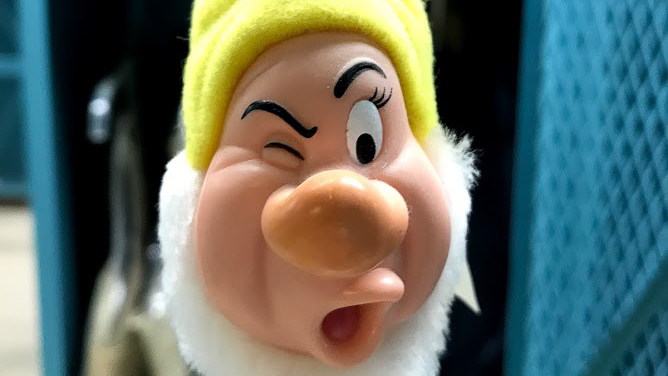 Cleaning out my stuff at the PD I’m coming across a lot of things that have some good stories attached.  The Dwarf (is that still OK to say?!) above reminds me of one of them.

Around 2000-01, I was working Patrol in South Scottsdale (Hayden / Chaparral area) when we got a call to assist Adult Probation revoke the probation of a 20-year-old woman living in the town houses on the Southwest corner of Hayden/Chaparral.

They dispatched two units.  On that evening I had a civilian rider with me and the other Patrol unit had a trainee who was just out of the academy.

After meeting with Probation, they decided they were going to do a ruse and attempt to get the woman to answer the door by acting like they were delivering a pizza to the wrong house.  When she answered the door they would grab her and get cuffs on her.  They even brought a pizza and full Domino’s outfit.

The Probation guy rang the bell and started talking with her.  She knew something was up from the start.  The other Probation guys and the two other officers I was with were about 4 feet away, around the corner of the house, waiting to jump on her.

Well, all of a sudden I had a sneak attack series of sneezes hit me.  The full-on, didn’t get my hand to my face even, series of about 4 consecutive LOUD sneezes.  The woman did a, “what was that?”  “Who is on the side of my house?”  “Are you the cops?”

The Probation guy talked her into continuing the conversation even though she was suspicious.  She ultimately figured we were the police, went back inside and locked up her house.  This turned into a four hour stand-off when she called 911 and threatened to kill us and then herself if we tried arresting her.

I was re-positioned to watch the rear fence of the house that emptied out onto the Greenbelt in case she tried escaping out of the back.  I had been sitting out there for about an hour as Probation and negotiators tried talking her out.  I then heard a sound at the sliding glass door leading to the backyard where I was standing.  I peaked my head over the 6 foot high fence.  As I did the back door slammed shut, which was followed by a gun shot and the sound of breaking glass.  About thirty seconds later a second gun shot from inside of the house.  About 30 seconds later a third.

This triggered a four hour SWAT stand-off.  After not hearing from her since the shots, they entered and found what they expected, she had killed her dog before committing suicide with her revolver.  Those were 2 of the 3 gunshots.

About an hour later, the Violent Crimes Detectives talked to me and asked me to walk into the back yard.  About 3-4 inches directly below where my face was poking over the wall was a single bullet hole.  Apparently she saw me and cranked off a round.  When I dropped (like a rock) back below the wall and then ran to take cover behind my car, she thought she hit me.  We later learned that she called her mother, she told her she had just killed a cop and was going to shoot herself.

The Sneezy head comes into play when I returned to work the following week.  The trainee, who went on to become a great cop before leaving for the private sector, had a family member who worked for Disney.  They had about 20 of these Sneezy key rings at home.  The put them all over my locker, my seat in the Briefing Room, my Patrol Car, my equipment, etc.  I was finding them for the next two months.  I saved one and put it in my locker where I could see it every time I put on my uniform to remind myself how quickly shit can go back doing this job.