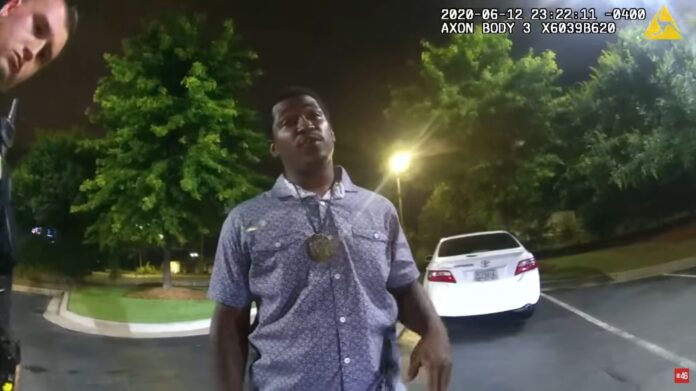 I spent from 2006 to 2018 doing digital forensics for law enforcement, including hundreds of video extractions, enhancements and interpretations. Looking at the charging documents brought forward by DA Howard in the Brooks shooting, he stated, “We have also concluded that Rolfe was aware that the Taser in Brooks’ possession. It was fired twice, and once it’s fired twice, it presented no danger to him or to any other persons.” Examining the video that has been released, that statement appears to be factually incorrect (as have been several of the other statements made by this DA).

First, let’s talk about the use of the term “fired” when it comes to the Axiom X26 taser used by ATL PD, which is the same taser we used in Scottsdale.  You can read along with the taser’s Operations Manual if you want. The taser has two unique methods of use. The first is what people are used to seeing. When you point it at someone a distance away and pull the trigger, two barbed darts leave the device. The top one travels straight while the bottom one leaves at an 8-degree downward angle.  The darts are attached to two thin metal wires.  When both (has to be both) darts implant themselves into a person and the trigger is held, the device sends 50,000 volts and between 0.0026 and 0.0036 amps.  And it continues to send the electric current for five seconds before shutting itself down.  If the darts stay connected and the wires intact, additional five second charged can be applied.  Here is a video of what it looks like (note that the video shows the civilian X26 being used, the main difference is it provides a 30 charge, referred to as a “ride”, instead of the 5 second ride used by LE tasers):

One thing to note about the video.  The X26 makes a unique “popping” sound when fired and an equally unique sound as it discharges the electricity.  This will be come important when you watch the video of the incident.

The second way a LE X26 taser can be deployed is through a technique referred to as a “drivestun” or “contact stun”.  On the exterior of the cartridge that hold the darts are two offset metal contact points.  If you were to place both contact points onto a person and pull the trigger, the electricity is placed directly into the person, bypassing the explosive mechanism that cause the darts to be expelled from the device.

Therefore, you can place the device onto a person and “tase” them without the device being “fired”.  If you were to lift the device even a half inch from the suspect and pull the trigger the darts would be discharged.  In the picture you can see the two silver metal contact points on the taser’s cartridge.

Watching all the video from the Brooks shooting, you can clearly see that Ofc. Devin attempts to drivestun Brooks around his ankle during the altercation.  It is that application of the device which causes Brooks to reach down, grab and ultimately disarm Devin of it.  The best footage of this is from the dashboard camera of one of their patrol vehicles.

After Devin is disarmed and Brooks gets back on his feet, you can see Brook attempt to shoot Rolfe with the taser. Rolfe immediately returns fire with his taser.  So up to this point it appears that the taser Brooks has in his possession has one of the two sets of cartridges discharged.  I will note this, you hear what sounds like three pop during the quick exchange.  The question is this, did three dart deployments happen during this exchange, and if so, who fired twice?  I can’t tell from the video but, later video from Wendy’s helps to answer this question.  If you let the video play on and just listen to the audio, you can hear what appears to be another pop from a taser deployment, followed by the Rolfe’s three fatal gunshots.

Here is where the video evidence really helps.  When you view the Wendy’s roof video of the foot chase, you see Brooks turn and then what appears to be the discharge of another set of darts from the taser.  The exhaust from the explosive charges within the cartridge can clearly been seen leaving the device in an outward direction in the video.

It is milliseconds after this that Rolfe discharges his firearm.  Here is the image that shows the discharge from the taser controlled by Brooks. 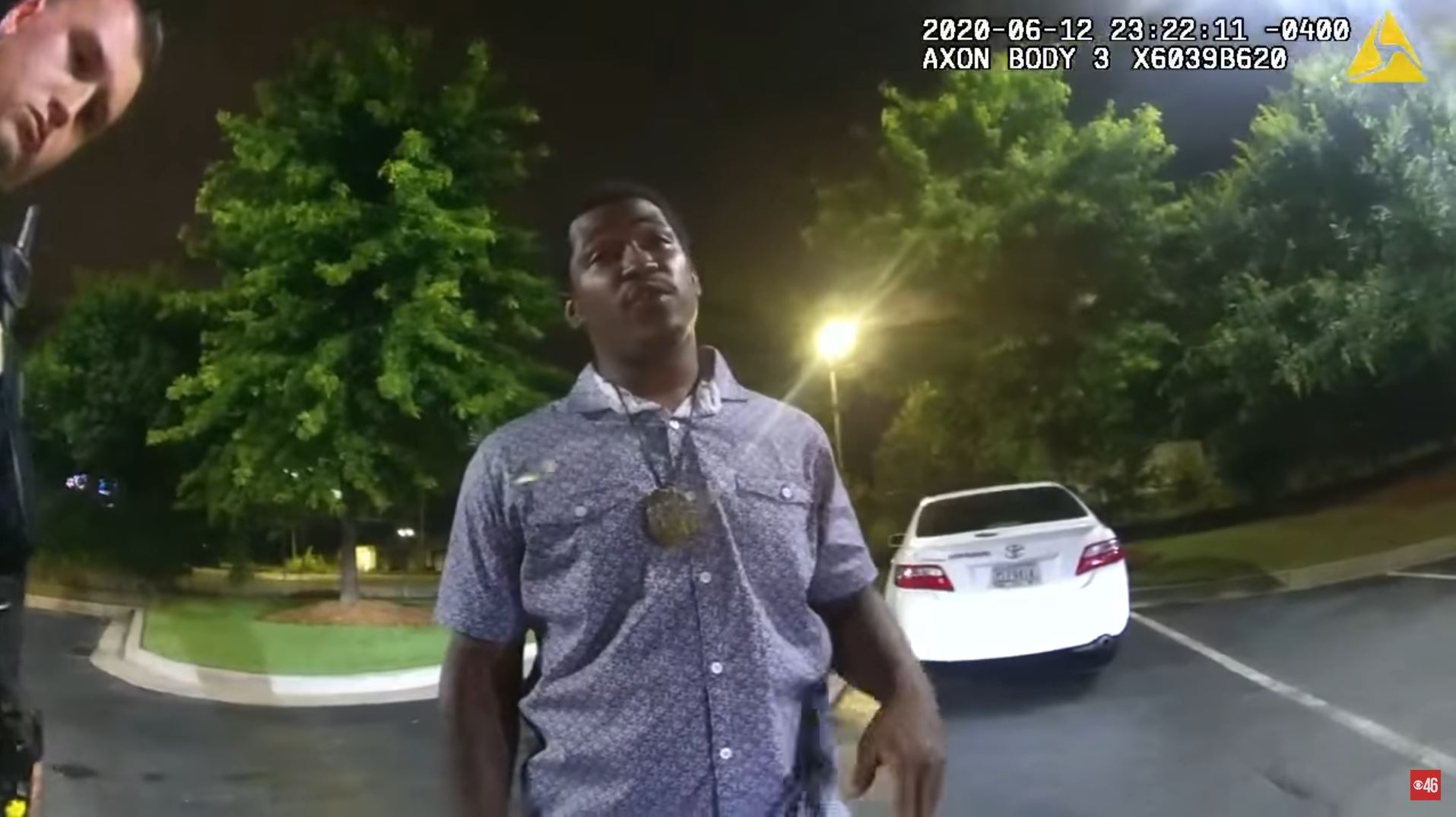 Simply put, a taser that has had both of it cartridges expended does not expel anything when the trigger is pulled again.  It does not pop like you hear in the dash cam video.  When both cartridges have been used the device resorts back to an old school stun gun of the early-2000s where the device can only be used as a drivestun weapon until it is reloaded.

The video evidence suggests that the taser Brooks had in his possession had not been fired twice prior to his attempt to flee.  It suggests that during the foot chance Brooks turned and fired the second taser cartridge in the direction of Rofle.  This in turn caused Rofle to fire his firearm.

If I was the expert video witness testifying in Rolfe’s trial, I would conclude that the video evidence supports that Brooks did fire the taser twice.  The first was just after getting back to his feet as it was captured by the dashcam video.  The second based on video evidence and audio evidence was as he was running and turning toward Rolfe during the foot pursuit.  As for the three popping sounds in rapid order captured by the dashcam video, I am unable to determine if one of the two tasers was discharged twice at that time.  I would defer to the physical evidence at the scene.

And here is the kicker in all of this.  There will be very, very clear physical evidence as to where each device was discharged.  You see, every taser cartridge contains 20-30 confetti-like Anti-Felon Identification (AFID) tags that are expelled when the darts are deployed.  When collected post-incident they can be examined to determine exactly which cartridge was deployed and the general location of where.  I’m sure the crime scene people for Atlanta PD collected them and know exactly where each taser was fired and how many times each one was.  Looking at the charging documents, there is no mention of that physical evidence.  It’s also curios that the Georgia Bureau of Investigations, who conducts the criminal investigations in police shootings, were not allowed to complete there investigation before the DA charging both Devin and Rolfe.  The GBI would have analysed all the physical evidence, including the AFID tags, and determined exactly how many times each taser was discharged and where.  I’ll be curious to read their final report, if and when, it ever gets released to the public.

One final note, if it the DAs position that the second firing of the taser by Brooks was the one captured on video during the foot pursuit, and that as a result of it the taser was no longer a deadly weapon, it might be the dumbest argument I’ve ever heard put forward by a DA in charging a police officer.

Let’s look at it this way.  If a suspect his holding a bow and arrow that only has one arrow and is confronted by a cop, as the suspect raises the arrow and fires it at the cop, would the cop be justified in the use of deadly force?  If you have a shred of common sense the answer is yes.  Now how about if the suspect fires the arrow at the cop and a millisecond after the arrow misses and passes by the officer, as the cop is in the process of drawing his weapon, should we expect the officer to recognize the bowman is empty of arrows and no longer represents a threat?  Oh hell no.  For anyone that has been line a life or death encounter, especially those trained in how to respond to various types through experiential and scenario based training, you will understand that when your body goes into fight or flight mode, the reptilian part of your brain takes over and your body goes on autopilot.  It is whatever you have repeatedly been trained to do that will happen without you being able to control it.  When cops are trained to see a threat like a taser or arrow being fired at them, their training kicks in 100% and the response is simply part of their muscle memory.  So, if in this case the DA wants to argue that Brooks firing the taser at the officer during the foot pursuit constituted the second taser firing and that Rolfe should have instantaneously recognized the taser was no longer a threat, that’s not how it works in the real world.  When Brooks turned to fire while running, his actions set into motion the response all well trained officers would have given when faced with such a situation, period.

You might not like that officers are trained that way.  But they are and have been.  You can’t fault an officer for doing as he was trained and you certainly can’t charge him with felony murder for it.