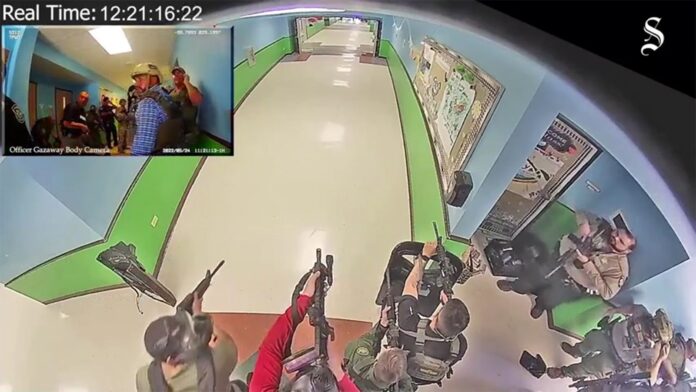 Watching the news media’s coverage of the Florida school shooting, in particular their coverage of the School Resource Officer’s actions (or inaction), angers me. I’m going to give you a crash course in Active Shooters, Tactics and Police Training.  After reading this you will be more educated than it appears any of the talking heads in the news media are, even the former law enforcement officials they trot forward to carry their narrative on.  Here are some of the headlines:

The term “Active Shooter” gained prominence after the Columbine school massacre in April of 1999.  Before that you might have heard similar incidents referred to as “going Postal” as I did growing up in the 1970s and 80s.  It refers to “an individual actively engaged in killing or attempting to kill people in a confined and populated area; in most cases, active shooters use firearms(s) and there is no pattern or method to their selection of victims.”  That is pulled directly from the Department of Homeland Security’s pamphlet distributed to school districts.

Prior to Columbine law enforcement treated an active shooter the same way they treated any priority/emergency call involving a violent suspect in a structure.  The first responder’s job was set up a perimeter and limit the suspect access of movement.  Once the area was secured the SWAT or other tactical team would be called in along with negotiators.  After a period of attempted negotiations, if they were unsuccessful, the tactical team would breach the building with hopes of arresting or killing the suspect.

In the aftermath of Columbine, with dozens of stories of students being killed while law enforcement staged outside and waited for tactical teams to arrive, local and federal law enforcement organizations gathered to address the “secure and negotiate” issue.  What came out of their discussion was a totally new tactic and way of thinking for police.

Between 2000 and 2001 a new tactics was rolled out to local law enforcement.  I work for a very progressive police department and we were one of the first medium size organizations to adopt this method and philosophy.

It was referred to the Active Shooter, Hunter-Killer Team tactic.  It called for the first officer on scene to act as a recon platform.  He or she was to listen and attempt to locate the shooter and direct the next three officers to his or hear observation location.  Once this four-person team was formed, they would enter the structure and act as a hunter-killer team with the sole purpose of shooting and killing the active shooter.

This called for a big change in police tactics and thinking.  Before, cops were taught not to rush into unknown situations without proper back-up.  The TV cop shows where a solo officer runs up to a doorway, screams, “NO TIME FOR BACKUP!”, kicks down the door with one foot and shoulder rolls into the room while firing a single bullet into the suspect’s forehead is Hollywood, pure and simple.  We were taught to approach methodically.  You would hear instructors say, “slow is smooth, smooth is fast”.  We were taught that one officer rushing into a situation usually resulted in a dead or injured officer that could provide no aid.

Now we were being taught to exchange our safety for the chance that a fast and violent response might limit the carnage.  As part of the speed and violence of action, it called for cops to purposely bypass injured and/or dying victims we encountered on our way to engage the shooter.  In fact, we were to ignore anything besides positive stimulus, in the form of gunshots, explosions or screams, directing us to the suspect’s location.  This included booby-traps and explosives.

Once the team located the shooter, usually in a room or other enclosed structure, all four officers were to enter the room and engaged the suspect with the explicit purpose of shooting him until he was no longer a threat.

This philosophy was very different for law enforcement for many reasons.  First, we were always taught from our first day at the academy that our primary job is to go home to our families every night.  This flew in the face of that.  Now we were told to take a minimal team, lacking both the heavy trauma plates and assault rifles SWAT members would have, and engage a suspect that has more firepower and is in a defensive position.  We understood that the first one or two officers through the doorway were probably going to get shot.  The hopes were that at least one member of the four person team would survive long enough to eliminate the threat.

Additionally, it went against every police instinct to bypass victims that are bleeding out or could be protected/rescued from the scene, this includes fellow officers.

From 2000/2001 until about 2010 to 2012, this tactic was taught and in the policy of most of the law enforcement agencies in our country.  Knowing that in a mass shooting incident multiple agencies would be responding and working together, thus almost all agencies in a major metropolitan areas were trained the same way.

This tactic slowly started to change between 2010 to 2014.  While it was found to be effective, what changed it were lessons learned from real life examples.  The majority of suspects, when confronted by the first police officer, usually committed suicide with their own weapon and did not engage police.  This lead to the thought that if one or two cops could quickly get to the shooter, they would commit suicide, thus ending the threat with limited danger for the officers.

We kind of came full circle back to the Hollywood idea of the police officer.  Some agencies began to tell officers that there is NO TIME FOR BACKUP and to enter situations alone, trading speed for group safety.  Some agencies refused to go that far and have in policy that a minimum of two officers enter.  Others have stuck to the hunter-killer team tactic and still teach it.

Unfortunately, some police organizations give mixed signals in their training or no guidance at all.  Some agencies still have written into policy that active shooters will be meet with a hunter-killer team of 4 to 5 officers but on the side tell their officers not to wait.  Some agencies haven’t given any direction and/or training since about 2001 when this was a hot topic in law enforcement and the federal government was giving grants for agencies to practice this tactic.  I’m a little confused what my agency’s policy is today.

I don’t know what the active shooter policy of the Broward County Sheriff is.  This deputy might be a coward.  Or he might have been following his agencies policy.  They might not have a policy and never trained on this scenario.  These are questions that will have to be answered and should be answered before this 32-year veteran’s life is ruined in today’s social media world.

Now you have more information about law enforcement’s response to active shooter than almost anyone you will see on TV.  If this comes up for discussion at Happy Hour and co-workers are f-bombing the police for their response, you can simply give the facts and explain that their might more to the story than is being reported.